Below we offer a bespoke list of these systems that come in a range of sizes, configurations, and processing capabilities, so you'll be sure to find something to suit your application.

Not sure which one to go for? Why not get in touch with one of our friendly machine vision experts? 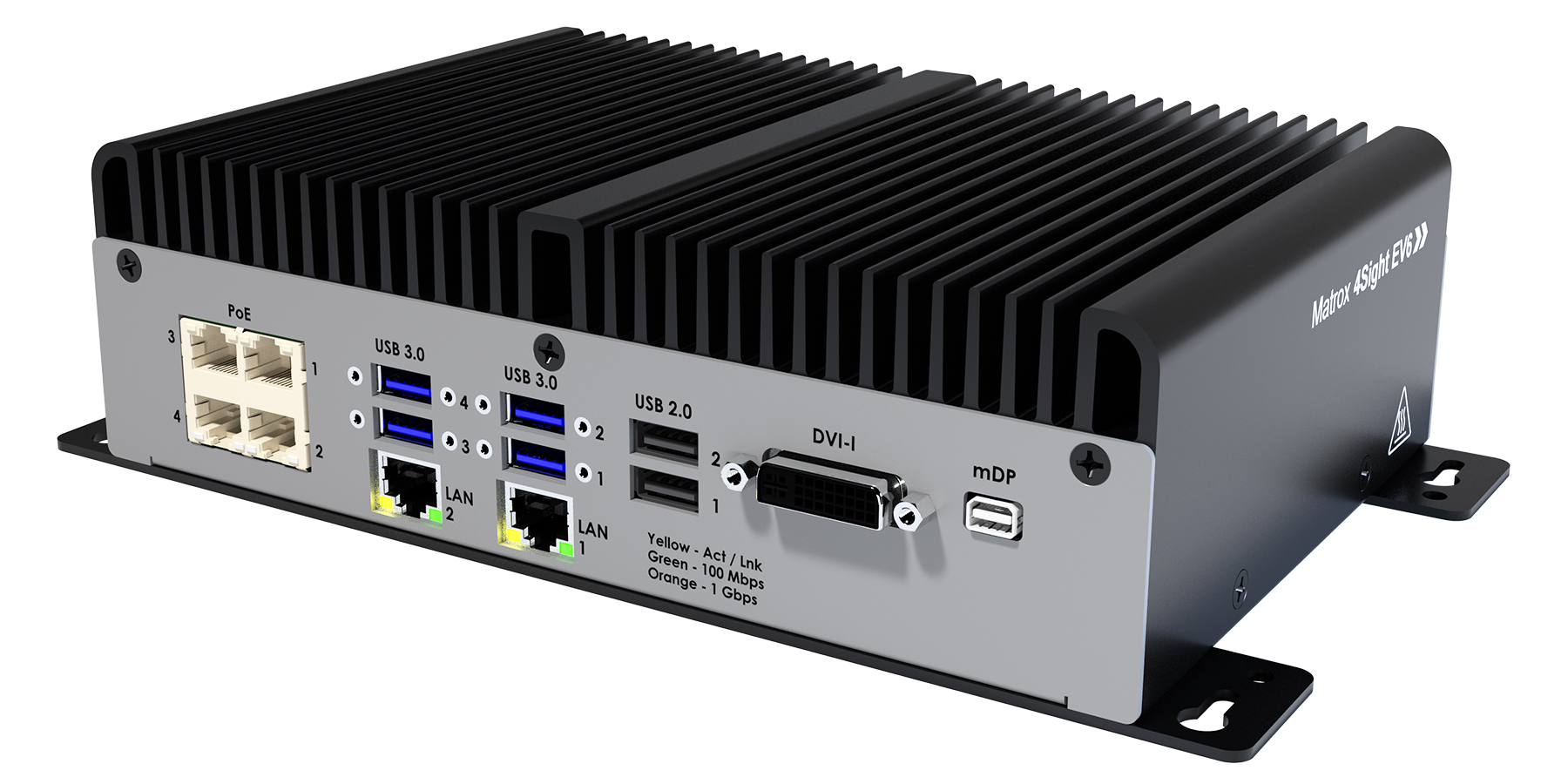 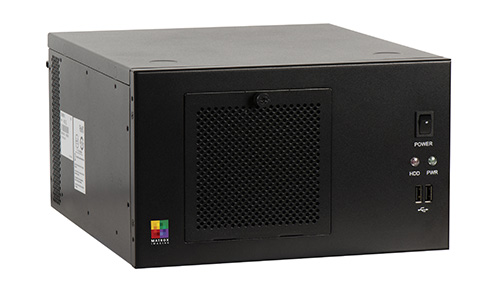 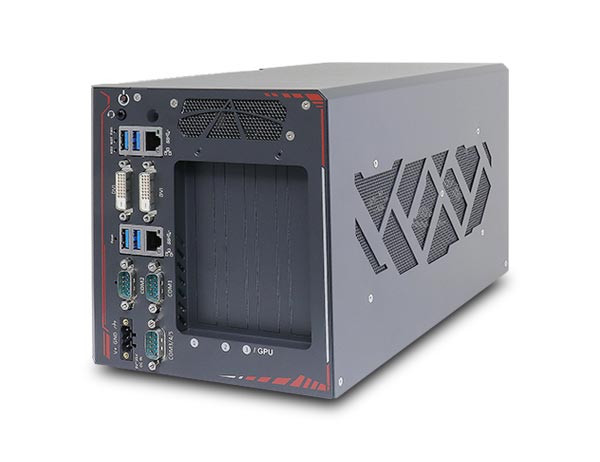 Nuvo-8111 series leverages an Intel® 9th/ 8th-Gen Core™ processor with H310 chipset. It has one x16 Gen3 PCIe slot for accommodating a GPU card, and an additional x4 PCIe and a PCI slot for industrial I/O cards such as DIO, AIO, communication or motion control card. It features front-accessible I/Os including two GbE, four USB 3.1 Gen1 and five COM ports for easy access when it is rack-mounted or placed inside a cabinet. Storage-wise, the system supports two 2.5” SATA SSDs/ HDDs plus one mSATA socket to house an mSATA SSD.

For more information, please see the datasheet below. 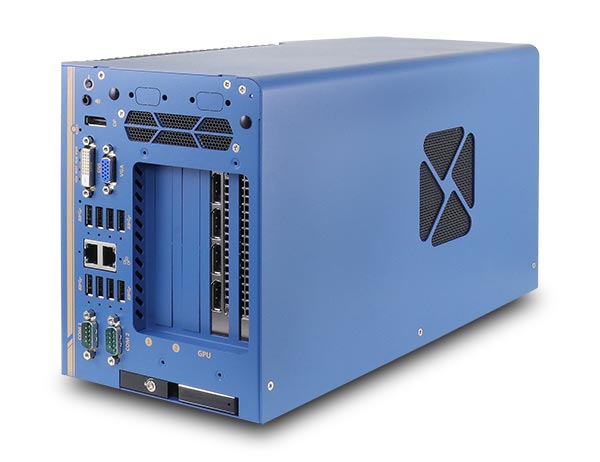 Nuvo-8108GC-QD is a rugged edge AI platform specially designed for NVIDIA® RTX A6000 and RTX A4500 Ampere GPU cards. The GPUs offer tremendous computing power and product longevity, to take GPU-accelerated edge AI applications such as autonomous driving, vision inspection and intelligent video analytics to the next level of reliability and availability.

Powered by an Intel® Xeon® E or 9th/ 8th-Gen Core™ (up to 8-core/ 16-thread) CPU with workstation-grade Intel® C246 chipset to support up to 128 GB ECC or non-ECC DDR4 memory, it has a strong foundation for building a powerful AI edge computing platform. It has a refined thermal dissipation design to optimize GPU performance in high-temperature environments. Additionally, Nuvo-8108GC-QD comes with a dedicated mounting bracket for RTX A6000/ A4500 to keep the GPU card firmly secured in the PCIe slot. Along with Neousys’ patented damping brackets*, it ensures rock-solid operation in intensive shock and vibration conditions.

For more information, please see the below datasheet. 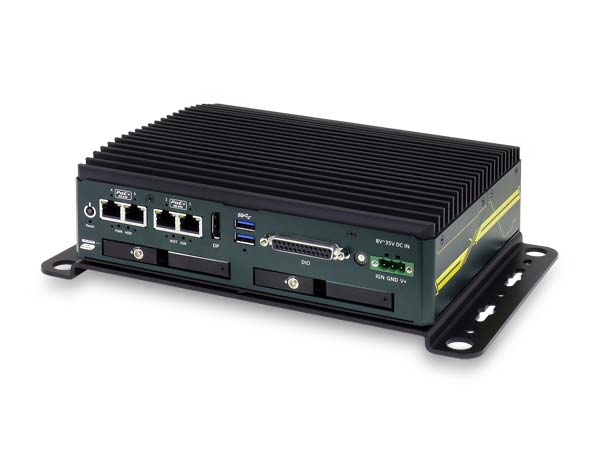 SEMIL-1700GC series is one of the world's first IP67-rated, waterproof and dustproof inference server with pre-installed NVIDIA® Tesla T4 or Quadro P2200 for the most demanding environments. It is a brand new page in Neousys' chapter of innovations as it represents a new level of robustness for rugged edge AI solutions. Coupled with Intel® Xeon® E or 9th/ 8th-Gen Core™ CPU, the system delivers excellent CPU and GPU performances for advanced edge AI applications in various environmental settings. SEMIL-1700GC series features Neousys' patented system architecture* to guarantee -25°C to 70°C fanless operation in a rack or wall-mountable 2U 19" enclosure. The inference acceleration of rugged GPU computers actualized real-time AI inference applications at the edge, where extremely rough conditions are expected. By combining powerful CPU/ GPU, robust IP67 protection, true fanless wide-temperature operation, rugged M12 connectors, and standard 2U 19" rack, SEMIL-1700GC series reveals unprecedented possibilities of deploying AI to places that have yet to be reached. 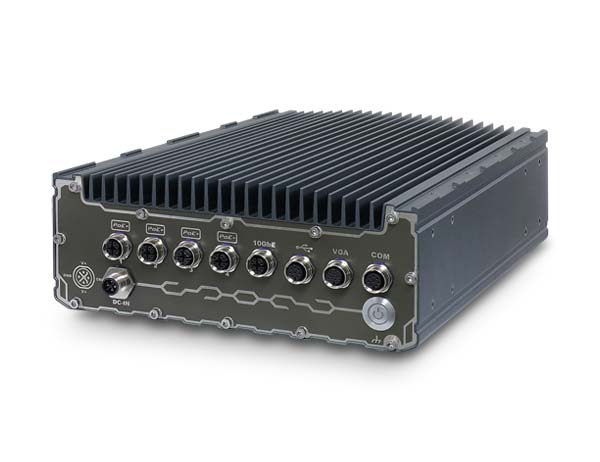 SEMIL-1700 series is an extremely rugged 2U half-rack computer with an IP67-rated waterproof and dustproof design. Powered by Intel® Xeon® E or 9th/ 8th-Gen Core™ CPU and coupled with workstation-grade Intel® C246 chipset, it can support up to 64 GB ECC/ non-ECC DDR4 memory. The 2U half-rack form-factor SEMIL-1700 series incorporates Neousys' best-in-class thermal design and offers mounting flexibility where you can wall or rack-mount up to two SEMILs side by side. To top it off, SEMIL-1710J is equipped with Neousys' innovative SuperCAP-based UPS* containing 2500 watt-second stored energy to sustain or safely shut down the system during unforeseen power outages. Protected against water, dust, high/ low temperature, shock/ vibration and power interruption, Neousys' SEMIL-1700 series is set to redefine edge application computing, where ruggedness matter. 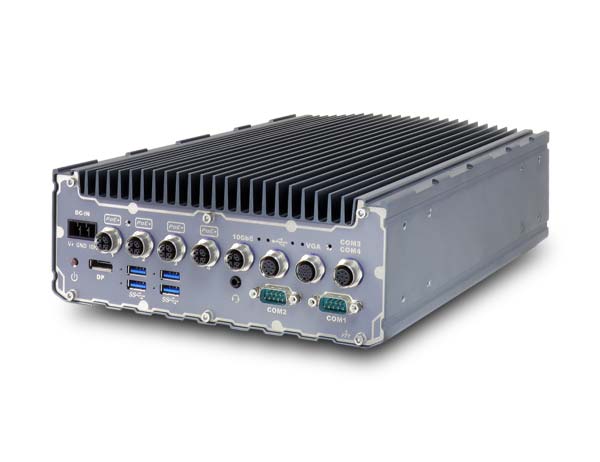 SEMIL-1300 series is a rugged fanless computer with robust M12 I/O connectors in a standard 2U 19" half-rack form factor enclosure. Powered by Intel® Xeon® E or 9th/ 8th-Gen Core™ CPU and coupled with workstation-grade Intel® C246 chipset, it supports up to 64 GB DDR4 ECC/non-ECC memory and offers flexible mounting options to wall or rack-mount up to two SEMILs side by side. In addition, SEMIL-1311J is equipped with Neousys' patented SuperCAP-based UPS containing 2500 watt-second stored energy to sustain and safely shut down the system during unforeseen power outages. It is the perfect solution for data protection and applications in unstable power environments. With a standard half-rack design, proven wide temperature operation capability, protected against shock/ vibration and power interruption, Neousys' SEMIL-1300 series is the ideal robust solution for extreme-rugged deployment. 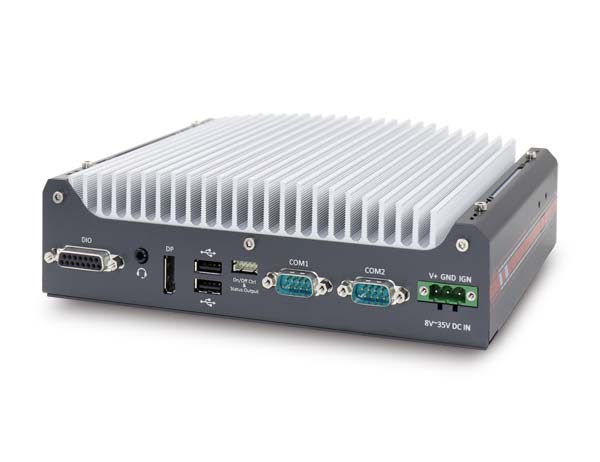 A Little Giant in the World of Rugged Embedded Controllers.

Nuvo-7531 is a super-compact, super-performing fanless embedded controller, optimal for a variety of industrial applications. Measuring just 212 x 165 x 63mm, it will fit into the most confined spaces - but despite its compact size, Nuvo-7531 does not compromise on performance. Based on Intel® 9th/ 8thGen Core™ 65W/ 35W CPUs, it can deliver more than 50% extra performance compared to the previous generation. The Nuvo 7531 also features 4x GbE ports and 4x USB3.1 ports for multiple GbE and USB cameras, and even a hot-swappable HDD tray for you to change out the storage drive without turning off the system or dismantle the chassis. There are also 3x mPCIe slots to install WIFI or 3G/ 4G for wireless communication needs. In addition, Nuvo-7531 is also equipped with 8x DIO, 2x COM ports and dual display outputs for your application needs. With a small footprint, amazing computing power, and a wide array of I/O functions, Nuvo 7531 is the ideal solution for a variety of industrial applications, especially when space is limited. For more information on the Nuvo 7531 from Neousys, click on the datasheet below. 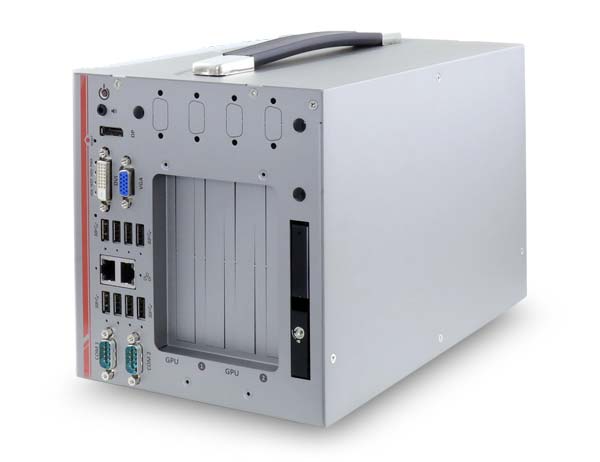 Nuvo-8240GC is a rugged Edge AI GPU computing platform designed specifically to support dual NVIDIA® Tesla T4s for advanced inference acceleration applications. It features NVIDIA multi-precision Turing Tensor Cores and new RT Cores while offering tremendous GPU power up to 130 TFLOPS in FP16 and 520 TOPS in INT4 for emerging GPU-accelerated edge computing and advanced AI inference. In addition, Nuvo-8240GC is powered by Intel® Xeon® E or 9th/ 8th-Gen Core™ CPU up to 8-core/ 16-thread coupled with workstation-grade Intel® C246 chipset to support up to 128 GB ECC or non-ECC DDR4 memory. The Nuvo-8240GC is Neousys' response to the never-ending performance demand in industrial Edge AI platforms and now with double the inference power, Nuvo-8240GC is ready to take it to the next level. For more information on the Nuvo-8240GC from Neousys, click on the datasheet below.

The new Nuvo-7000 series, powered by Intel® 9th/ 8th-Gen Core™ i processors with up to 8/ 6-core architecture that offer significant performance improvement over previous 6th and 7th-Gen platforms. Nuvo-7000 series includes Neousys' track-proven technologies for superior ruggedness and versatility, such as effective fanless design, patented expansion Cassette and proprietary MezIO™ interface. It also incorporates cutting-edge computer I/O like USB 3.1 Gen2 with up to 10 Gbps throughput and M.2 2280 M key socket for NVMe SSD or Intel® Optane™ memory for ultimate system performance. The plethora of on-board I/O ports (GbE, USB and COM) feature sophisticated protection circuits to endure stress from ESD and power surge. This makes Nuvo-7000 series by far the most rugged embedded computer Neousys ever created. Flexible and versatile for a variety of applications, Nuvo-7000 variants are available with different Cassette expansion options. With Neousys Nuvo-7000 series, you get a true rugged platform that can accommodate a single PCIe card (Nuvo-7000E), dual PCIe cards (Nuvo-7000DE) or a single PCI card (Nuvo-7000P) according your application needs. 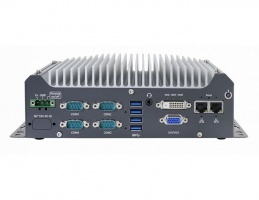 Nuvo-7501 is a cost-effective, compact and yet powerful fanless embedded computer with a 255 x 173 x 76 mm footprint. Powered by an Intel® 9th/ 8th-Gen Core™ hexa/ octa core CPU, it offers more than 50% computation performance improvement over the previous generation. Nuvo-7501 is designed to be simple and compact while retaining essential elements of a rugged embedded fanless solution. It features I/Os such as 2x GbE, 4x USB3.0 and 4x COM ports for common industrial applications. In addition to the M.2 2280 SATA slot (SATA signal) and can also support a 2.5" SSD/ HDD or a 3.5" HDD. Its' derivative model, Nuvo-7505D, offers isolated DIO and isolated COM, which can protect the controller against ground loops in harsh environments. The Nuvo-7501 has retained quality materials all Neousys systems utilize and the design flow/ stringent test procedures it must endure. It is a fanless embedded platform that has hit the sweet spot in terms of cost, size and performance. Nuvo-7501 is an ideal fanless embedded solution for various industrial applications. 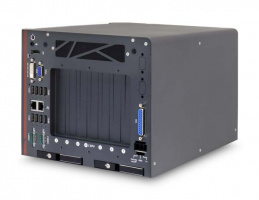 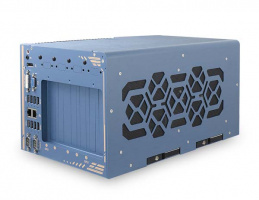 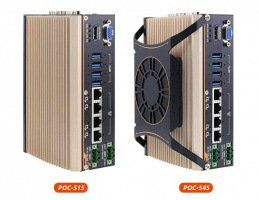 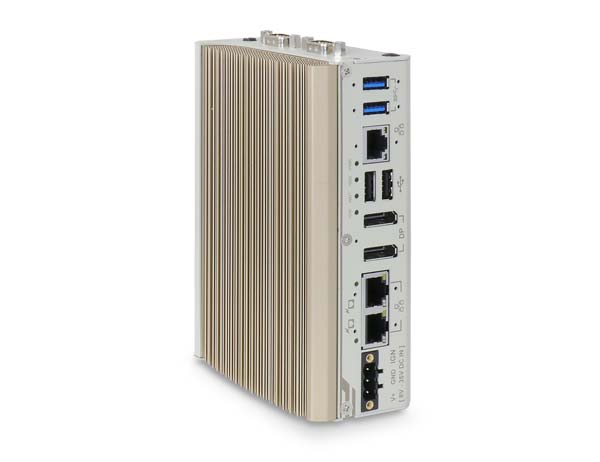 POC-400 is an ultra-compact fanless embedded computer for industrial applications. It utilizes the latest Intel® Elkhart Lake platform Atom® x6425E 4-core CPU that can deliver 1.8x CPU and 2x GPU performance improvement, compared to the previous generation. POC-400 features an ultra-compact design measuring just 56 x 108 x 153 mm, which can easily fit into restricted spaces. Featuring three 2.5GBASE-T Ethernet ports with IEEE 802.3 PoE+ capability, they provide higher data bandwidth for devices such as NBASE-T cameras and is backward-compatible with 1000/100/10 Mbps Ethernet. It also has two 4K DisplayPort, 2x USB3.1 Gen1, 2x USB 2.0 and COM ports for general industrial applications. Supporting Neousys’ proprietary MezIO™ interface for function expansion, you can add functions such as isolated DIO, RS-232/422/485, ignition control and 4G/ 5G by installing a MezIO™ module. Moreover, POC-400 comes with an internal M.2 E key socket for a Google TPU or an Intel® Movidius VPU module to transform it into a lightweight AI inference platform at the edge. For more details, take a look at the datasheet below. 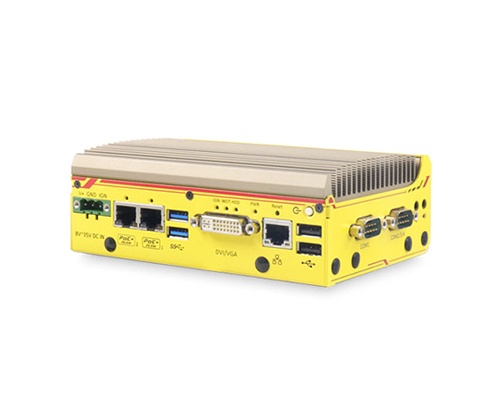 Ultra-Compact In-Vehicle Controller with GigE, PoE+ and Isolated CAN.

The POC-351VTC is an ultra-compact, fanless in-vehicle controller powered by the Intel Apollo Lake Atom E3950 quad-core processor. It combines performance, extraordinary reliability and affordable cost for versatile in-vehicle applications. The POC-351VTC offers two PoE+ ports to power devices such as IP cameras, and one additional GigE port for data communication. It also features isolated CAN 2.0 port and RS-232/ 422/ 485 ports for communicating with other automotive devices, with a total of four M.2/ mPCIe sockets and six antenna holes to accommodate a variety of 4G, 3G, WIFI and GPS modules. 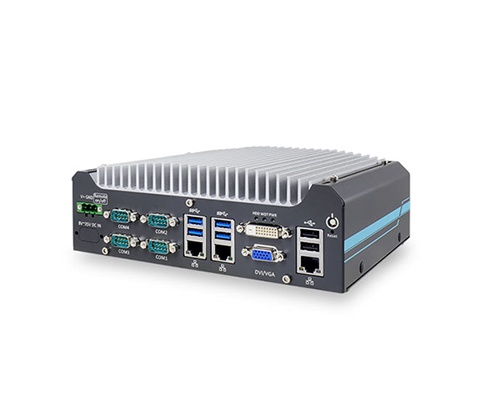 Based on Intel’s Skylake platform, the Nuvo 5501 is designed to provide cutting-edge performance and reliable operation in extreme environments. Its LGA 1151 socket offers users the flexibility to select a 35W CPU from the 6th-Gen Intel Core I, to Celeron line-up to suit many application requirements. The compact Nuvo-5501 is a cost-effective solution that does not compromise on performance and reliability, making it the ideal embedded controller for industrial vision systems. 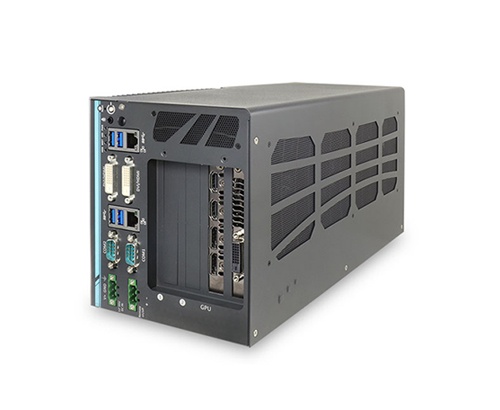 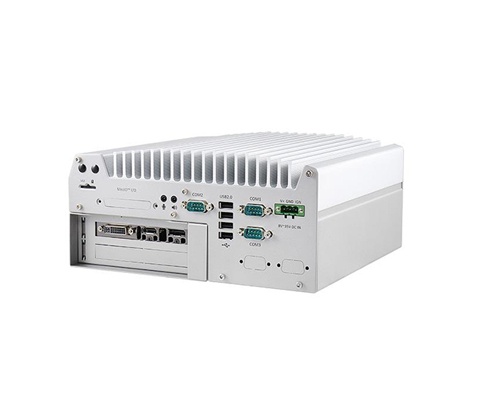 The Nuvo-5095GC is based on Intel’s Skylake platform, supporting 35W/65W 6th-Gen Core processors and up to 32GB of DDR4 memory. It offers rich I/O functions, such as GigE, USB 3.0 and COM ports to connect to external devices. With its support for the NVIDIA GeForce GTX 1050 GPU, the Nuvo-5095GC opens a new chapter for industrial computers as the first embedded controller targeted at emerging applications of CUDA computing, autopilot, AI inference and virtual reality, with all the features required for a compact, reliable and powerful GPU-computing platform.

The Nuvo-5026E Series adds dual PCIe slots expansion abilities while preserving all the practical features such as ruggedness, performance and versatility of the 5000 Series. The expansion cassette makes PCIe card installation easy without the need to disassemble the system. 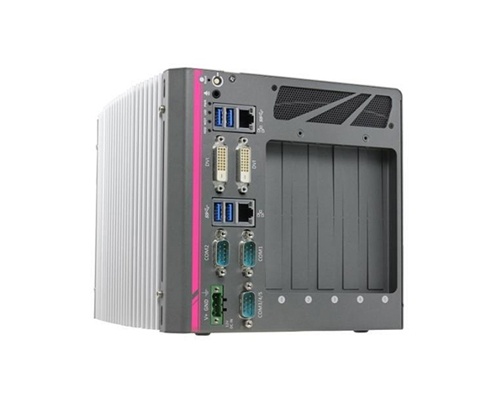 The Nuvo-6000 series is the perfect replacement for bulky rack-mount or wall-mount Industrial PC systems. Leveraging the power of the 6th-Gen Intel Skylake platform, it delivers the same computing power as traditional Industrial PC systems, but in a more compact form-factor with fanless operation. 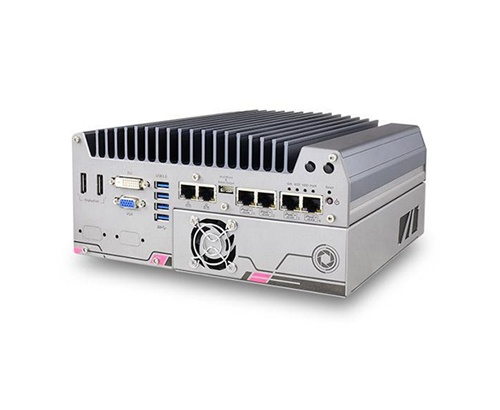 The iVIS-200 is an innovative smart camera framework, where you can build up your own x86-based smart camera by integrating an off-the-shelf camera. The iVIS-200 supports GigE/USB3/USB2 camera interfaces and can be powered from devices with 802.3at PoE+ capabilities, enabling access your smart camera with a single cable solution. It also features a mini-PCIe slot with SIM support for installing a 3G/4G/WIFI module. 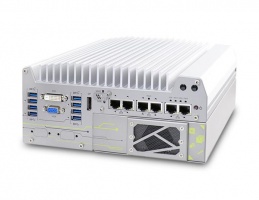